Irina Alexandrina is one of the most famous Saint-Petersburg artists represented in the collection of Pushkin Art Gallery. Her works have been chosen as a decoration for the halls in many governmental buildings and institutes in Saint-Petersburg and corridors of the White House in the USA.

Irina Alexandrina paints the city at the turn of 20th century. It’s her favorite historical period. It was the period of glory and prosperity of the Northern Capital of Russia (at that time St. Petersburg was the capital of a powerful empire). The city built on the Neva River was as important as Paris and London were. Transient busy life is captured on Alexandrina’s canvases.

Magnificent architectural ensembles are inseparable from people merrily walking around the city or hurrying somewhere on business. The liveliness of the scenes is shown with quick colorful brushstrokes, generalized shapes and play of light and shades.

Edouard Manet, Claude Monet, Paul Cezanne, Gustave Caillebotte and many other impressionist artists served as an inspiration for Irina Alexandrina’s becoming an artist and had a huge impact on her manner of painting. She studied thoroughly French tradition of landscape painting and brought some elements of French gloss into depicting Saint-Petersburg life.

Irina Alexandrina had more than ten personal exhibitions in Moscow, Berlin, Prague, Barcelona and Florence. Her works can be found all over the world. 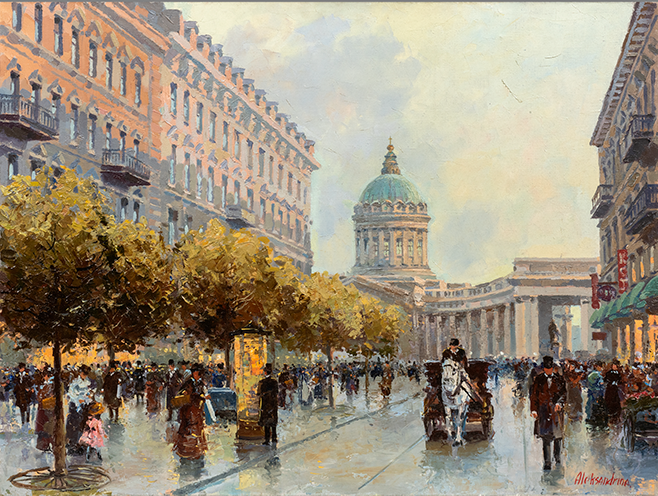 Vanity, chic and dynamism are merged with the magnificent architectural ensemble of Saint-Petersburg in the painting of an outstanding artist Irina Alexandrina. We see the depiction of city centre, crowds of people and the outlines of Kazan Cathedral. Looking at the magnificent outfits of people, it is easy to understand that the artist has depicted her favorite period - the beginning of the 20th century. This is the time of the prosperity of the city, its economic and cultural growth. The picture is made in impressionism style with colorful big brushstrokes in light spring shades. Such an art work can be an excellent memory of a trip to Saint-Petersburg or a gift for your loved ones.
Read more 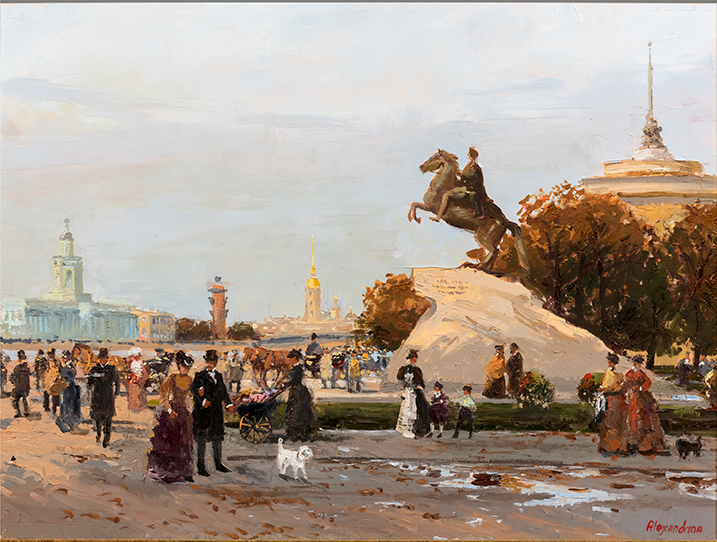 Magnificent symbolic work made by talented and famous artist Irina Alexandrina. Autumn sunny day is depicted in the painting in impressionistic manner. The main subject of this art work is a cityscape. We see here the monument for Peter the Great, Rostral Columns, Kunstkamera. City life goes together with monuments and buildings. Architectural ensembles are inseparable from people merrily walking around the city or hurrying somewhere on business. All the episodes are shown in the painting using dynamic colorful brushstrokes, generalized shapes and play of light and shades.
Read more 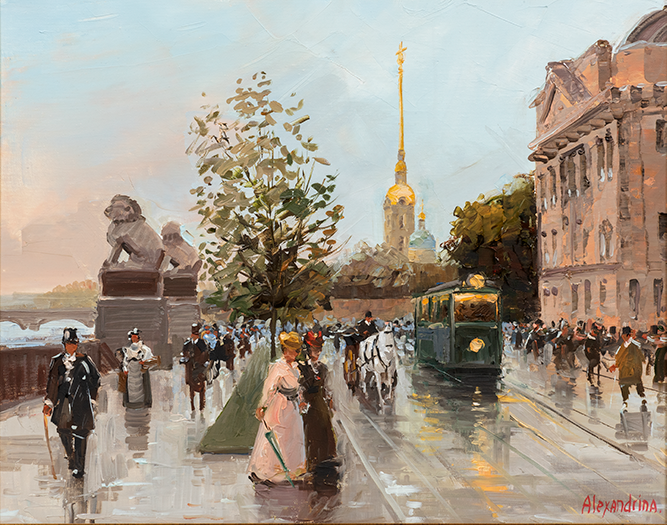 Charming artistic work made by Irina Alexandrina in impressionistic manner. Here we see the author's favorite subject – a cityscape. The artist says: "When I look at the city, I feel an emotional lift." The city embankment is filled with people. By their clothes, the viewer can understand that the artist has depicted Saint-Petersburg of past times. According to Alexandrina, the beginning of the twentieth century is the glory of the city, its cultural period and economic growth. In the distance you can see the Peter and Paul Cathedral - the symbol of Saint-Petersburg and one of the most famous and cultural places.
Read more 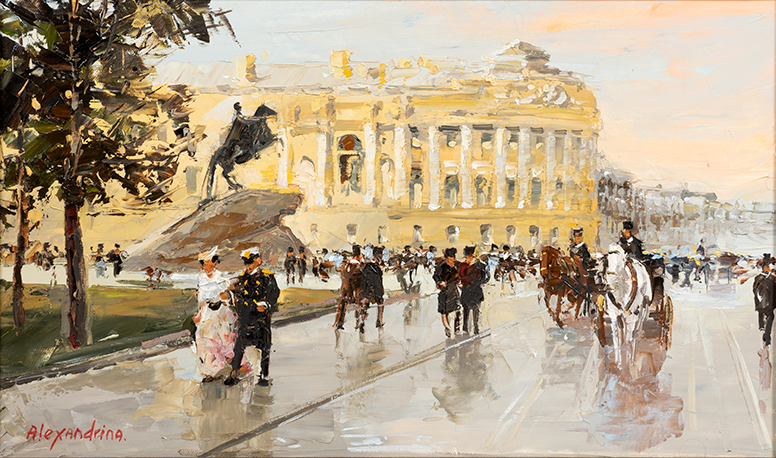 An amazing art work, created by the talented artist Irina Alexandrina, demonstrates all the beauty of buildings and everyday life together. The viewer sees a picturesque panorama of the Senate Square - one of the central squares in Saint-Petersburg. The artist continues a thorough study of the tradition of depicting impressionism with her own personal touch. Alexandrina also studied the French classical landscape and brought elements of French gloss to the images of Saint-Petersburg.
Read more Bright and symbolic painting with a depiction of the significant attraction of the Northern capital. The artist depicted Petersburg in the early 20th century, when the city was at the peak of its economic and cultural growth. The city of Alexandrina is always dynamic, the streets are filled with crowds of people hurrying somewhere on business. Magnificent architectural ensembles are inseparable from people. We may easily notice that the artist is extremely inspired with beauty of Saint-Petersburg, especially with its old times. The picture is made in impressionism style with colorful big brushstrokes in light shades.
Read more